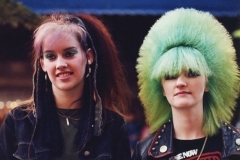 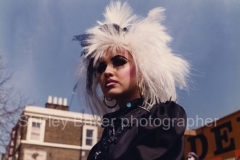 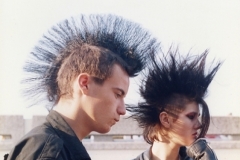 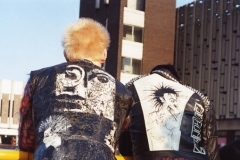 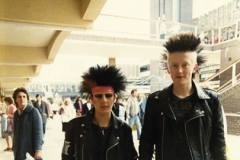 During the 1980s, Shirley’s doctor husband took up a medical directors post in London. Baker embraced this opportunity and spent time in Camden and London’s west end where she photographed the vibrant second phase of Punk, in both striking colour and black and white. These photographs present London’s street culture during a period of vibrancy between 1986 and 1991.

Alongside these London photographs is an additional collection of punks hanging around Stockport high street in Cheshire, around the same early 1980s period. These, similar to the first series, are in full colour, as well as black and white.

The photographs documenting London Street Life, in the 1980s, included these punk photographs but focused primarily on shoppers, street musicians and people eating and drinking in the streets. These were part of the exhibition Grazing at Cornerhouse in Manchester, which was initiated by Dewi Lewis. September – October 1991.

The original prints of many of the images featured on this page can be purchased from the Shirley Baker estate. Please refer to the Contact Us page for further details.