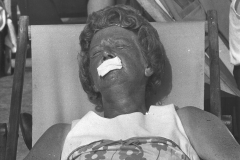 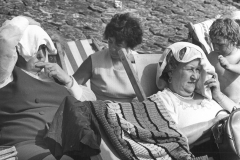 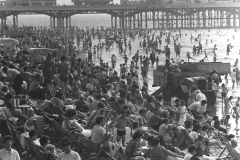 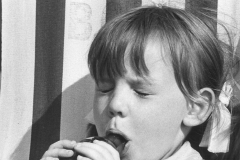 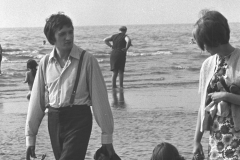 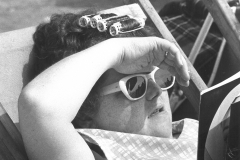 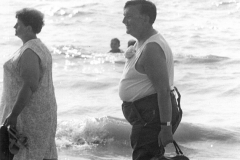 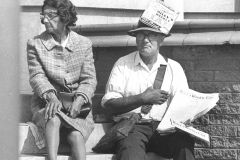 The seaside town in the North West of England was renowned as a working class family holiday resort until the advent of the package tour holiday abroad in the 1970s. It has a distinctive British seaside culture of bawdy humour, fairground rides, amusement arcades and the famous Blackpool Illuminations, an annual festival of lights. Shirley Baker often visited the town and in August 1970 she took to the packed beach where she observed people on holiday, playing, relaxing and relating to each other outside of work and the pressures of daily life.

Shirley’s gaze alights kindly on her subjects, never sending them up for a cheap laugh. Her observations often portray the tensions between people, as well the absurdity of their unconscious selves sleeping in public. Shirley’s photographs of fathers playing with their children are singularly touching, made more so by the fact that her previous work from the 1960s rarely featured men.

In contrast with later work taken on the beaches of the South of France, Shirley’s Blackpool photographs express a post-war British attitude to the body and sensuality: sensual pleasures being closed off and denied, or best kept for expression within the home.

The original prints of many of the images featured on this page can be purchased from the Shirley Baker estate. Please refer to the Contact Us page for further details.